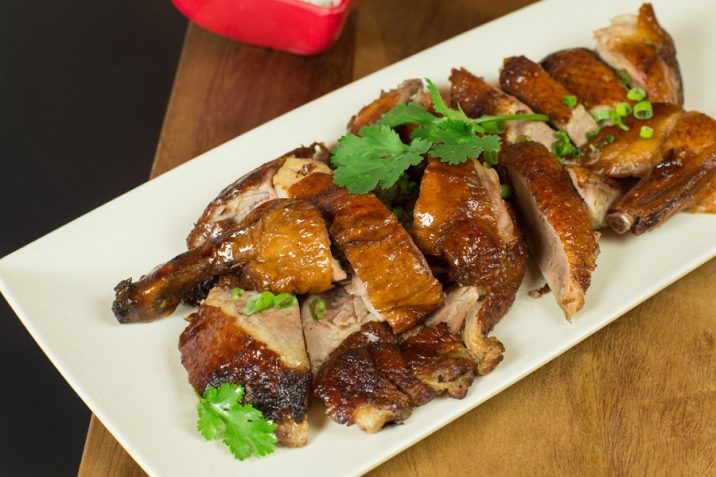 This is the third in a series of posts that feature “under the radar” menu items at Silverton’s Las Vegas restaurants.

Chef Thierry Mai of WuHu Noodle serves an extensive menu from this modest  fast-casual dining room.  There is much to cheer about here, but one of the most “under the radar” items is the Roasted Duck.

This signature item is marinated overnight in a secret house seasoning blend, and slow-roasted in a special oven.  The result is Peking perfection.

“For those who aren’t hungry enough to eat an entire duck, we offer the meat in several of our menu items,” said Chef Thierry.  “For instance, the Peking Duck Folded Buns.”  These popular starters combine roasted duck meat, microgreens, cucumbers and green onions in a freshly-steamed folded lotus bao bun.

What is Peking Duck?

Peking duck is one of the most celebrated dishes of Beijing or Mandarin Chinese cuisine that has been prepared since the Imperial era. It was once relegated to only emperors in the Forbidden City.  The meat is sweet and savory, characterized by its thin, crispy skin.  It is typically a delicacy dish or one used for celebrations.

WuHu Noodle brings you authentic Asian recipes and traditional favorites. Locals know that this is the place for noodles in Las Vegas, featuring authentic regional noodle dishes from all over Asia.  It’s called one of the best Asian restaurants on Blue Diamond Road in Las Vegas.